On 28 September 2017 we celebrated the nation’s life savers and first aid champions at our annual Everyday Heroes Awards.

Special commendations were given to three outstanding individuals:

Firefighter Nathan Cane was off duty in Euston Station when he noticed a man had collapsed. He began CPR and called for a defibrillator. As two British Transport Police officers ran to get one he carried on giving CPR and using the defibrillator Nathan brought the man back to life. The man was John Newman, uncle of Channel 4 News broadcaster Cathy Newman. He made a full recovery. Nathan and John had an emotional reunion at the awards ceremony.

Ex-serviceman Tony Davis and Tobias Ellwood MP both put themselves at risk to save the life of another during the Westminster Terror Attack. Tony jumped a fence to reach PC Keith Palmer and began performing CPR before Tobias Ellwood MP took over. Sadly, Keith Palmer’s life could not be saved but both men showed incredible bravery.

All three received their special commendation for bravery and were celebrated among nine other winners on the night, hosted by TV presenter and best-selling author, Katie Piper.

I feel very privileged to host the Everyday Heroes Awards, I know from personal experience how important it can be to know what to do in a first aid emergency and act quickly. - Katie Piper 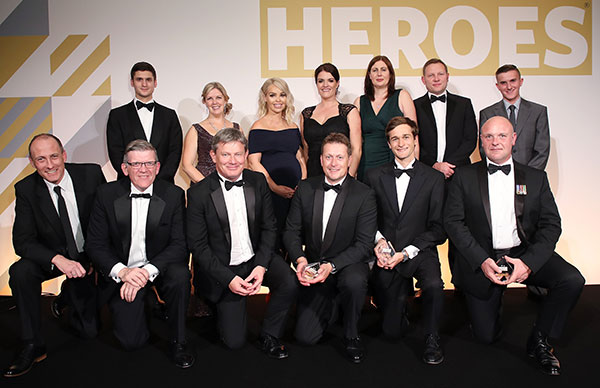 Rachelle Miller came to the rescue of a stranger, Lewis Bond, who had passed out in his car. Realising his heart had stopped, she started CPR while his friend called for an ambulance. Rachelle continued with CPR until the first responder arrived and took over. Using a defibrillator, they managed to eventually restart his heart – it had been stopped for 24 minutes. Lewis was rushed to hospital and made a miraculous recovery after being fitted with an internal defibrillator. Incredibly, Rachelle had completed CPR training that very same day.

Caine Wildman, 14, came home from school one day to find his father Craig collapsed on the sofa. Realising he wasn't breathing, Caine immediately took control of the situation. He placed his father on the floor, called an ambulance and started CPR. When the paramedics arrived, Caine stayed calm and helped to reassure his younger brother and sister. Craig was told by the consultants that Caine's first aid skills, and cool, calm actions, had undoubtedly saved his life.

Natasha’s daughter Ava-Mai was 11 weeks old when she suddenly stopped breathing. Natasha remained calm and composed as she used her instincts to give her baby CPR. After calling 999, she followed instructions from the operator until the ambulance arrived. Her actions saved Ava-Mai’s life. Determined to turn her experience into a positive, Natasha set up Baby Resuscitation, a community project offering resuscitation training to parents, grandparents and carers. Over 900 people have attended the courses which have directly contributed to saving at least two young lives.

School Staff Instructor Mark Goatcher was called to help a pupil who had stopped breathing. While another member of staff called for an ambulance, Mark began to deliver CPR. The paramedics arrived and the boy was taken to hospital where he spent some time in intensive care. He had to have extensive cardiac surgery and a pacemaker fitted. He's now on the road to recovery – thanks to Mark's quick response and first aid skills.

Alex McHugh and her family were on the school run when her seven-week-old son Joel stopped breathing. Despite feeling sheer panic, the quick-thinking mum rushed to a close-by shop and one of the customers helped her to lie him on the floor while she performed CPR until the ambulance arrived. These actions saved his life. The reason she knew what to do? Alex had watched the St John Ambulance Nursery Rhymes Inc video which teaches CPR – just the day before.

Luis joined the unit in 2013 and quickly became an active volunteer. During his two years as Unit Manager, he has grown the unit to over 120 active volunteers. Under his leadership, his team has volunteered over 11,300 operational hours, providing first aid at events in the community. Luis leads by example - inspiring others to go above and beyond normal expectations. He embodies the very best of St John Ambulance. Luis represents those countless volunteers who work tirelessly, not just on the front line, but behind the scenes. Through their leadership, volunteers receive the support they need to deliver the St John Ambulance values, and are inspired to go beyond any reasonable expectations.

House building company Barratt Developments has first aid trained personnel on each of its developments across the UK - including 2,486 direct employees first aiders. There are over 400 defibrillators across all its sites and offices. Going above and beyond its legal obligations, the company refreshes all its first aid training everyday year.

First aid is a compulsory part of school life at Lucton School in Herefordshire, with all 12 to 13 year olds getting basic emergency first aid training. Pupils in year 10 take the St John Ambulance Youth First Aid course and participate in realistic first aid scenarios. Nine out of 10 staff at the school are trained in first aid, including teachers, support staff and minibus drivers.