On this day: 1,200 of our volunteers support Peace Celebration Day

This year, as we celebrate our 140th anniversary, we look back at how St John Ambulance volunteers have played an important role in some major historical events.

On this day, 98 years ago, across the nation, thousands of people came together to celebrate the end of the First World War. While November 1918 marked the end of over four years of fighting, it wasn’t until peace negotiations came to a close in 1919 that the war was declared officially over. The 19 July 1919 was made Peace Celebration Day.

Huge crowds of spectators gathered across London to witness thousands of troops take part in the victory parade, which also included 1,200 St John Ambulance brigade members. Celebrations were held all over the city, with entertainment and fireworks provided in five royal parks. St John Ambulance volunteers had a vital role to play in keeping the crowds safe with 24 first aid stations. More than 8,000 cases were treated, and some volunteers remained on duty for nearly 30 hours.[1]

Nearly a century later, our volunteers continue to provide first aid to those enjoying London’s beautiful royal parks. This year, you’ll see us at the Royal Parks Half Marathon, taking place on 8 October. The route takes runners on a 13.1-mile journey through Hyde Park, St James’s Park, Green Park, past Wellington Arch, the Houses of Parliament and the Royal Albert Hall. 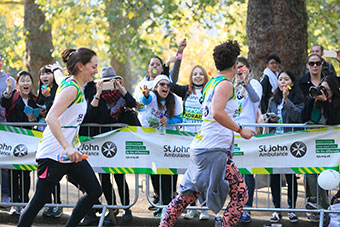