On this day: St John Ambulance helps wounded in France

We look at the history of the St John Ambulance Hospital during the First World War.

102 years ago today, St John Ambulance opened its hospital in Etaples, near Boulogne in France. At the time, Etaples was home to a British army base which was notorious for its military training. It was also a stopping point for soldiers making their way to the front.

The hospital played an important role during the First World War. It provided 520 beds for soldiers wounded by the nearby fighting. It was described as ‘one of the finest and best-equipped hospitals in France’ [1] .

On the 19 and 31 May 1918, the hospital was almost destroyed by hostile aircraft.

‘The staff exhibited magnificent gallantry in their attempts to protect the patients, of whom 11 were killed and 18 were wounded' [2]

In August 1918, the hospital was rebuilt in Trouville and was later demobilized in 1919. Learn more about St John Ambulance in the First World War.

While we don’t run our own hospital anymore, we are still involved with hospitals all over England. With our professional ambulance crews, we provide out-of-hospital care to over 125,000 patients every year. Our ambulance crews provide many different services. For example, A&E support, bariatric transfers and repatriation. 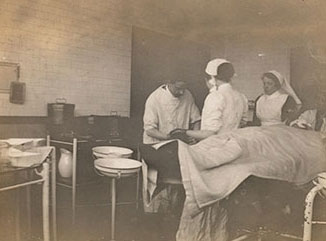