On this day: St John Ambulance volunteers during the Blitz

We look back at the role of St John Ambulance during WW2.

Throughout 1940, German aircrafts dropped thousands of incendiary bombs across the UK. London was a key target and suffered the worst fire damage since the great fire of 1666. Many buildings were badly damaged, including eight Wren churches, the Guildhall and the Old Bailey. Luckily, St Paul’s Cathedral survived.

During the Second World War, St John Ambulance volunteers supported their local communities in many ways. For example, they:

In the photograph, there are two St John Voluntary Aid Detachment Nurses caring for civilians sheltering in Piccadilly Tube Station during the Blitz.

Supporting local communities and raising awareness of first aid is still very much at the heart of what we do. Our new C.A.R.E for a Heart campaign aims to educate more people on how to act fast if faced with a cardiac arrest.

Thousands of families feel the impact of cardiac arrest each year. If more people knew what to do before an emergency, more lives could be saved. You can follow the four simple steps of C.A.R.E now, to give those you a love the best chance of survival. 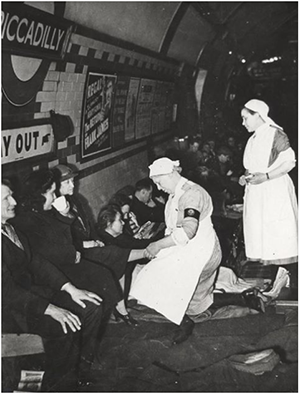