Exercise Unified Response, which began on Monday 29 February and lasts four days, involves over 1,000 volunteer ‘victims’ that are part of the drill based around a simulation of a tower block collapsing on to a London tube station.

Four separate venues in London as well as a disused power station in Dartford, Kent, are being used for the exercise.

The purpose of the operation is to test the co-ordinated response of more than 70 agencies in the event of a major disaster involving a high number of casualties.

To create the most realistic environment possible, a destroyed tube station has been created, with platforms, carriages, rubble, as well as fake dead bodies and volunteer ‘casualties’ with life-like injuries, such as burns and severed limbs.

While not directly participating in providing responders to the exercise, St John Ambulance has been supporting London Ambulance Service with a small logistics team, equipment vehicles and a communications unit.

Paul Woodrow, Director of Operations for LAS, said: ‘By testing our responses to an incident like this we’ll increase our preparedness for any major incident that affects London. It is also a great opportunity to test how we work with emergency services and all other partners across London.’

With such a large scale drill taking place, the London Voluntary Sector Panel has for the first time tested a gold commander representing the whole voluntary sector in the event of a major disaster.

The gold–silver–bronze command structure is used by emergency services in the UK to establish a hierarchical framework for the command and control of major incidents and disasters – gold being strategic level command.

Katherine Eaton, St John Ambulance London Region Events & Logistics Manager, said: 'The exercise provides a good platform for testing the idea of having a gold commander coordinating all voluntary organisations if such a disaster were to occur.

‘We are excited to participate in this exercise and we are using the opportunity this week to explore the idea and see what we can achieve.' 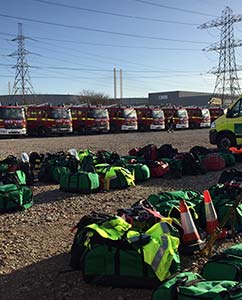