How volunteering with St John Ambulance helped me become a paramedic

Jodie Gough, student at the University of West England tells us about how volunteering for St John Ambulance was a stepping stone to study Paramedic Science.

It was during Freshers’ Fair at university when I grew bored and spotted some guys in green at a stall. I wandered over to admire their uniform, and my life hasn’t been quite the same since.

First aid was something I wanted and needed to learn, and at this point I had never even heard of a first aid unit in university. I’d faced multiple situations where a little first aid knowledge could’ve come in handy, including an incident when my friend’s heart stopped whilst in a bathroom with me.

I was studying English and drama at university, and hadn’t considered a career in health care. I quickly began devoting all my time to St John Ambulance, attending as many duties as I was allowed. I soon realised that the three-year-old girl who used to dress up as a surgeon was still within me, and I had the best brainwave ever: I should become a paramedic.

I attended an interview for Paramedic Science at the University of West England in December in 2016. My only experience in health care has been entirely thanks to my role within St John Ambulance. Because of the incredible people I have met, I have shadowed Emergency Department consultants, attended an Emergency Medicine conference, and volunteered over 300 hours within a few months. It was down to this experience that I was offered a place on the course the very next day.

I have been incredibly lucky with the duties I’ve attended. I was on the finish line for London Marathon, in a FIT team for V-Fest and attended duties such as the London to Brighton Bike Ride and Wimbledon. The dream is to crew an ambulance with my boyfriend Luke (who I also met through St John Ambulance) as a paramedic. Volunteering for St John Ambulance has been an honour, and I hope to be part of the organisation for many years to come.

Or visit our YouTube channel to watch our student volunteer vlogs. 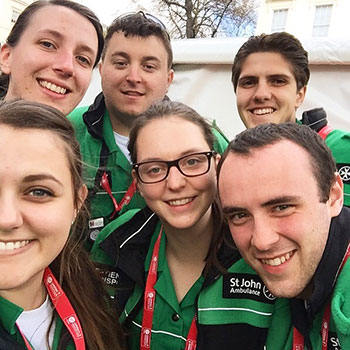