Lyssa Barber, Head of Internal Communications at UBS, shares her very personal journey through the lows of mental ill health to recovery and the founding of the Mental Health Network at UBS. 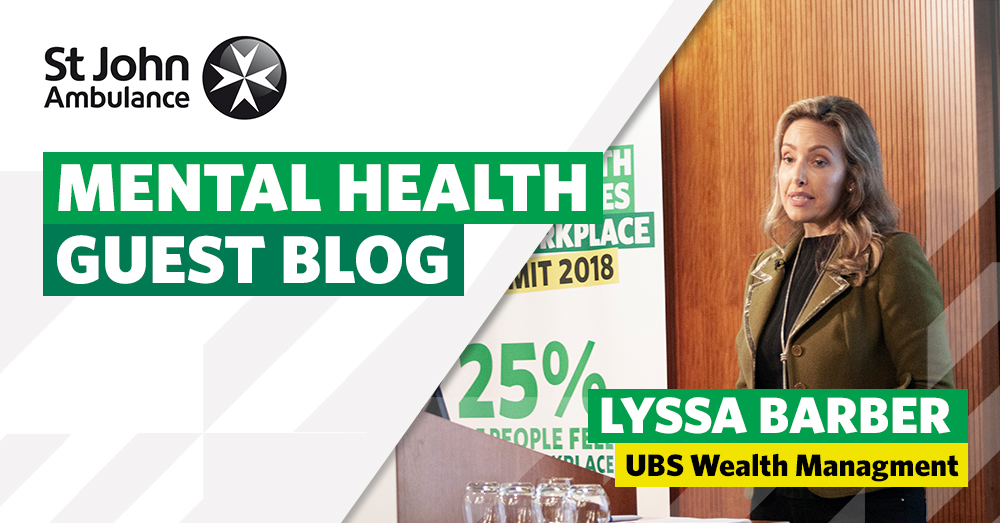 There's a list which appears in magazines occasionally - ‘Top 10 Most Stressful Life Events’. It highlights the things you can go through which have the biggest psychological impact. I'm fairly sure you're only supposed to experience them one at a time, but in 2004 I managed to tick off: organising our wedding, bereavement, changing jobs (both husband and me) and moving house twice. Having carried me successfully through all those, my mental health waved a tiny white flag and I experienced a complete breakdown. Panic attacks, depression, anxiety, self-harm.

My mental health had been patchy since childhood. Mental ill-health is a combination of nature and nurture, so being the grand-daughter of a depressive hypochondriac (grandpa), and the daughter of an anxious domestic violence victim (mum) had gone a fair way to making me more vulnerable. Add in mum's messy divorce, an unstable living environment, a custody battle and limited familial support and you end up with a perfect recipe for childhood mental ill-health. I became a teen with significant self-esteem and behavioural issues which – lacking the right help –meant a future of mental health struggles.

Through the work I've done with my therapist, I've been able to mourn the loss of my younger years to mental ill-health. How different my teens and twenties might have been! But living with someone who's also seriously unwell means it's not likely your own needs will be met. My sister's youngest daughter looks a lot like me and is the most confident, outgoing, self-possessed little girl. She's two. Mum recently said to me 'She reminds me of you at the same age'. This seemingly innocuous comment felt like a knife. My pain was twofold – a reminder that my life could have moulded me very differently, and also that she is just as vulnerable to life's slings and arrows as I was.

This is far from being an unusual story. The figures speak for themselves; 75% of adult mental health issues start in childhood. One in four people will suffer with a mental health concern in any given year. Only 24% of us get any kind of treatment. Ongoing loss to the UK economy is close to £100bn. Suicide is the biggest killer of men under 45. So we have a problem which will take a concerted, ongoing culture shift to address.

Looking back, I was pretty fortunate. Mental health support via the NHS has been cut to the bone in recent years, but my local GP was really switched on with regards to mental health, and worked with me to provide the right support. I found a therapist I trusted and, with a bit of trial and error, found a medication which worked for me.

That period – over about a year or so – was a total eye-opener for me as to the ways that mental ill-health symptoms can manifest. On the psychological front, I had panic attacks, psychotic episodes, derealisation and paranoia to go with my crippling depression and endless anxiety. On the physical side, I experienced joint stiffness, palpitations, muscle pain, fatigue, headaches, nausea, loss of appetite, night sweats and more.

Sleep was a non-starter, which added into the difficulty I had functioning. I remember the first decent night's sleep I had after doing a lot of research – I went full-on with my approach. Hot bath, low lights, drowsiness herbal remedy, lavender on my pillow, mindfulness recording. 8 hours' uninterrupted sleep; the first in months. Bliss.

Between 2004 and 2013 I was moderately OK. Peaks and troughs. The depression eased, but the panic attacks continued apace. It was only in 2014 that I got a formal diagnosis of OCD, which is what was triggering the panic response. Public perception of Obsessive Compulsive Disorder is limited mainly to those who have the compulsive aspect – hand washing, cleaning, hoarding, needing to repeat certain actions many times etc. The obsessive type is less well-known; and it's not liking things 'just so', so feel free to call out anyone who says 'Oh, I'm a bit OCD about these things'.

I deal with what are termed 'obsessive ruminations' – horrible thoughts which plague me. Husband late home from work? I'll play out a series of events in my mind which culminate in the police arriving at my door to tell me he's dead. I get very strong visual images of murdering my beloved cats. Or harming my nieces and nephew. These particularly are terrifying, precisely because they run so counter to what I would do in real life. When I was at my poorliest, I became lost in hypochondria. All those psychosomatic symptoms I was experiencing were signs of AIDS, or cancer, or ME. It was constantly exhausting and terrifying. And I worked full-time through all of it.

You wouldn't expect someone with a debilitating physical illness to come to work, but it's what we seem to expect of those with mental health issues. Particularly anxiety and depression. They're stigmatised to the extent that people just soldier on, never telling anyone and never asking for help. In some cases having normalised what they're experiencing so much that they don't realise they need to ask for help. This is one of the things I'm working to change.

I'm in a very good place now. I’ve had some ups and downs in the last few years - particularly after my stepdad passed away in 2014 – but having been through it before left me better equipped to act when I realised I was headed down a spiral.

I founded the mental health network at UBS in the UK. We launched in 2016 and have over 350 members, and growing fast. Mental health and wellbeing is discussed across the whole of our UK business, with meditation, VR mindfulness, quiet rooms and Mental Health First Aiders all in the pipeline. I directed and produced our This is Me film, in partnership with the Lord Mayor’s Appeal Campaign, and recently abseiled down the side of 100 Bishopsgate to raise funds for the Samaritans. I've spoken at events across the country, including for St John Ambulance, BBC Radio Jersey, the Wellbeing at Work conference and more .

I’ve done all these things because of my mental health issues, not in spite of them. 15 years ago I would have had neither the confidence nor the fire to achieve any of these things. Ironically, the first spark of my motivation to help change typical business approach to mental health happened back in 2004, when I approached my then-boss with the news I’d been signed off work with depression.

'I don’t really believe in depression', he said. In one glib sentence erasing my lifetime of struggle. Well, much like gravity, you don't need to believe in it for it to be real. I do believe in it, I don’t want anyone else to have to go through that. I want a better understanding of mental health & wellbeing for everyone, in any size firm. I believe passionately that good levels of mental health & wellbeing are needed for everyone to really thrive. And thriving, engaged employees boost productivity.

I’ve been delighted to see the groundswell of focus on mental health over the last couple of years, and am excited about the potential for positive change. We all need to do more, and I'm ready to lead the charge.

Lyssa Barber joined UBS in 2013 and is Head of Internal Communications for the Wealth Management Division. In 2015 she founded Headscape, the UBS mental health awareness group, which she also currently chairs. Headscape provides information and resources on mental health and wellbeing for all UBS staff in the UK. Lyssa is also responsible for the delivery of Mental Health Awareness Week and represents UBS on the steering committee of the mental health initiative, This is Me in the City, part of the Lord Mayor’s Charity Appeal. When not at work, Lyssa loves travelling and scuba diving. She volunteers with the Cinnamon Trust and lives in Walthamstow with her husband and lots of cats.