The 2018 Everyday Heroes Awards recognised the outstanding bravery and first aid skills of people who have helped save lives and support their communities.

Three winners of each category, Community Hero, Workplace Hero, and Guy Evans Young Hero, were announced on the night. Alongside this, special awards were also given to the winners of the Volunteer of the Year and Lifetime Contribution to St John Ambulance.

The ceremony was hosted by celebrity vicar, broadcaster, and former pop star the Reverend Richard Coles. Alluding to the lyrics of his band, The Communards’ biggest hit, Don’t Leave Me This Way, he said:

‘Tonight’s winners didn’t leave. Instead, they stepped forward when others needed them most and their actions saved lives.’

Newcastle’s Alcohol Reception Centre (ARC), commonly known as the Booze Bus, is a joint initiative between St John Ambulance and North East Ambulance Service (NEAS). It is staffed by both paid and volunteer crew, and runs throughout the year on Friday and Saturday nights until the early hours of the morning. The ARC reduces pressure on the local A&E, the Ambulance Service and Police. Whether it's over-indulgence or a cardiac arrest, the ARC crew are on hand throughout the year to keep weekend revellers safe.

Garry Kerr had his first aid skills put to the test when out golfing with his seven-year-old son Ellis. While out on their round, they found a man collapsed and not breathing. Garry instantly gave lifesaving chest compressions for around 20 minutes while Ellis ran for help. An ambulance crew soon arrived and used a defibrillator to restart the man’s heart. Thanks to Garry’s intervention to keep oxygen flowing to the man’s brain, he made a full recovery.

Garry was so affected by the incident that he persuaded the packaging company he works for to buy a defibrillator from St John Ambulance and he completed a course in how to use it. The company also decided to make it a public access defibrillator and register it on the NHS database of defibrillators. Garry is also working with his son’s school to get a defibrillator.

John's dedication and focus to his role has ensured that St John Ambulance’s next steps in community delivery are well placed and well respected. He is accepting the award on behalf of all Community First Responder volunteers. Many have saved lives, and all have provided care when it is most needed.

Adam French, a trainee legal executive, learnt first aid on a St John Ambulance First Aid at Work course. His skills were put to the test when an elderly man had a cardiac arrest outside his law firm. The law firm’s secretary shouted for him after the man’s wife ran into the office saying her husband had collapsed in their car. Adam rushed to help and found the man, Ray, not breathing so pulled him out the car and began CPR. Ray soon began to breathe again so Adam placed him in the recovery position. However, Ray stopped breathing again so Adam resumed CPR, until a rapid response paramedic arrived.

Ray was fitted with an internal defibrillator and is on the way to a good recovery. Ray, his wife Patricia, and the paramedic returned to thank Adam. They told him that the surgeon had said his speedy response had definitely saved Ray’s life and prevented brain damage.

Supermarket chain Morrisons is putting its customers’ safety first as part of a partnership with St John Ambulance. It’s doing this by installing lifesaving defibrillators in 400 of its stores. Across the country, quick-thinking staff have already saved the lives of five shoppers by using the devices. Morrisons also organised for 2,300 of its employees to take part in St John Ambulance sessions on how to use the devices and basic first aid techniques.

The national rollout of defibrillators has been made possible thanks to a £500,000 donation from the Morrisons Foundation. It was inspired by one stores’ team who fundraised for a defibrillator after a customer had a heart attack while shopping.

Brighton & Hove Albion Football Club has an outstanding matchday medical team and 10 defibrillators. The matchday safety provisions are overseen by the club’s Head of Safety and Security, Adrian Morris. The medical team includes: 34 St John Ambulance volunteers, nine members of the South East Coast Ambulance Service, and three doctors. Since the stadium opened in 2011, they have saved the lives of all five people who have had cardiac arrests. All five football fans have made full recoveries. The odds of surviving a cardiac arrest are just one in 20, the chance of five out of five people surviving is one in 3.2 million. Yet, the fast-acting medical team have managed to defy these odds.

15-year-old Courtney ran to help a man who had been stabbed outside her home in Luton. She had looked through her curtains to see a group of youths stabbing a man in the leg and back with a large knife. She opened her door prompting the youths to run off, and went outside to help the casualty.

As an army cadet with St John Ambulance first aid training, she quickly put her skills into action. She shouted to her mother to call 999, raised the man’s legs, and applied pressure to his wounds. She asked a helper to support the man’s neck until the police and ambulance arrived, when she gave a full handover. The victim of the attack survived but has lifelong injuries. The police have praised Courtney for her actions and for her detailed statement.

St John Ambulance cadet, Charlotte Ellett, saved her father’s life when she spotted the symptoms of potentially fatal sepsis and insisted that her mother called an ambulance.

Charlotte's father, Nicholas, had felt unwell after lunch and went for a lie down. When 15-year-old Charlotte came home from school, she found her father with blue lips and nails. Her mother felt an urgent call to the GP would be enough. However, Charlotte explained her father had a high temperature, low oxygen levels, and was in grave danger. She persuaded her mum how urgent the situation was and an ambulance was called. Her father was immediately taken to hospital and was given urgent treatment for sepsis. The hospital said it was thanks to Charlotte’s knowledge and confidence that her father was alive.

While getting ready for school, 15-year-old Molly Harris, heard her mother shouting for her help. She ran into her parent’s bedroom and found her step-father, Peter, had stopped breathing, was purple in the face, and foaming at the mouth. He had suffered a cardiac arrest.

Molly, who had learned first aid with St John Ambulance as an army cadet, leapt into action. She told her mother to phone an ambulance and began CPR on her step-father. After getting tired, Molly decided it would be safest for her mother to take over. Her mother had never performed CPR before, however Molly showed her how to perform chest compressions and reassured her it was going to be ok. When the ambulance crew arrived, Peter was shocked with a defibrillator three times and was airlifted to hospital. Doctors said it was down to Molly that Peter survived.

Few volunteers have had such a continual impact on St John Ambulance as Clive Rooke, who has volunteered for 54 years. Clive first got involved when he signed up as a cadet after witnessing someone being pulled from the sea. He has held numerous roles in his home county of Avon. In 2008, he became Commander for Avon with overall responsibility for the county.

He eventually took on the new role of National Volunteering Adviser and remains in position today. As part of this, he has met volunteers all over the country to show support and hear what they think, want, and need. On top of these challenging roles, Clive still attends a unit at least fortnightly, volunteers as a first aid assessor, and until recently continued to be clinically active at events. His dedication is truly inspirational. 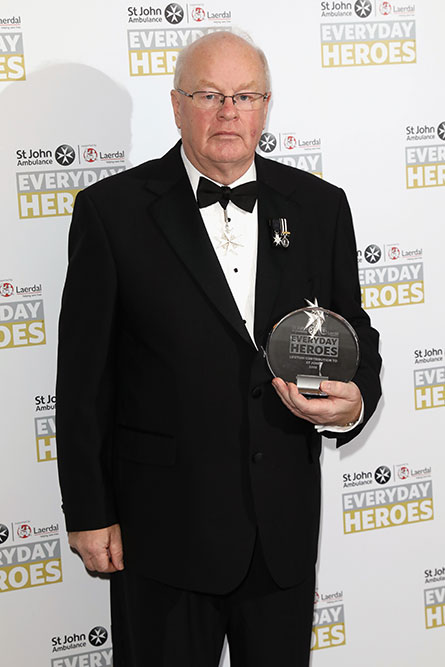 Volunteer of the Year:

As Event Manager at the London Stadium, Matt is responsible for bringing together over 50 volunteers and medical staff as one team. The stadium is one of the country's most challenging venues. It is home to West Ham Football Club, the Athletics World Cup, and hosts many large summer concerts. Matt enjoys little downtime with events taking place year-round. His planning and leadership means the fixtures and concerts run as smooth as possible. His team speak of his positive spirit and how he makes a point of thanking people for their time and efforts, ensuring they feel welcome and cared for.

Matt first joined St John Ambulance in 2013 and has taken on a number of leadership roles. Alongside these, he has continued to volunteer as a trainer and assessor, sharing his passion for first aid and passing on the skills to others.

The Everyday Heroes Awards showcases the incredible impact that St John Ambulance has in society.