St John Ambulance first aiders have been thanked for saving the life of Judith Mansfield, a theatregoer whose heart failed as she was waiting for a performance of The Bodyguard to begin, in Bristol, on Thursday January 21.

X-Factor winner Alexandra Burke, the leading actress in the musical, visited the patient and her lifesavers in the Bristol Royal Infirmary on Saturday 30th January to recognise their heroic actions.

Judith, from Highbridge, Somerset, was at the city’s Hippodrome theatre with her daughter, Bev Bishop, when she collapsed in her seat.

‘Completely out of the blue. There was no warning,’ said Bev. ‘Mum had been a bit puffed out on the walk from the car park to the theatre, but she’s asthmatic and I didn’t think it was anything unusual.'

‘Her cardiac arrest was completely out of the blue'

'we were in our seats and one minute I was talking to mum, the next moment she was out cold – it was terrifying.’

Fortunately, Kristian Keyte – a St John Ambulance volunteer who is currently training as a nurse at Weston General Hospital – was on a night out and sitting nearby.

Kristian rushed to Judith’s aid as soon as he realised she was unwell, and started giving cardio-pulmonary resuscitation (CPR).

He was swiftly joined by the St John Ambulance volunteers who were providing first aid at the theatre – Craig Rankin and Steve Jones.

While Kristian continued giving CPR, Craig – whose day job is working as a St John Ambulance paramedic – used the Hippodrome’s portable defibrillator to deliver the single life saving electric shock to Judith’s heart which revived her.

By the time the ambulance arrived and Judith was taken to the Bristol Royal Infirmary, she was responsive and talking.

‘Mum was so very lucky to be in the right place at the right time it could’ve been a completely different story,’ Bev added. 'So many people helped us – especially the St John Ambulance volunteers. I can’t thank them enough.'

‘We are eternally grateful to everyone involved, and my mum was treated with the utmost dignity and respect.’

Judith, recovering in hospital, doesn’t remember her cardiac arrest. ‘I got to my seat in the front row of the Grand Circle, took my coat off and the next thing I remember is coming round and people asking me if I was ok.’

‘These three St John Ambulance boys saved my life. If I hadn’t gone to the theatre that evening and I’d been at home when I had a cardiac arrest, I don’t know what would’ve happened.’

‘I’m very lucky to have been in the right place at the right time.’

Alexandra Burke was delighted to meet Judith and her life savers at the Bristol Heart Institute – particularly as Saturday night was her last performance in the city.

‘I’m just so thankful that Judith is ok and it’s lovely to meet her,’ said Alexandra.

Craig Rankin has volunteered for St John Ambulance for eight years and works as a paramedic with the South Western Ambulance Service NHS Foundation Trust (SWASFT).

‘It’s very rare to get an incident like this and it just goes to show that if you get “hands-on”, delivering CPR, and use a defibrillator early the outcome can be so positive,’ said Craig.

‘It’s amazing that Judith was talking to us so quickly, on the night, and it’s lovely to see her recovering so well at the Bristol Heart Institute.’ 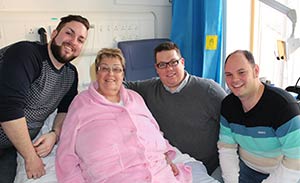