Munazah Abid, a student at the University of Greenwich, who is also a volunteer first aider says she spotted her dad was having a mini stroke thanks to her first aid training with St John Ambulance.

As a Fresher, Munazah joined her university's first aid LINKS unit and says that 'volunteering for St John Ambulance has been one of the best decisions I've ever made.'

Around Christmas time, Munazah was at home with her family in Thornton Heath, Croydon, when her dad mentioned he had blurred vision. The symptoms quickly eased, but over the next couple of weeks, her 67-year-old father displayed more symptoms including muscle stiffness, confusion and forgetfulness.

Realising this was not normal behaviour, despite her dad having other medical issues, Munazah conducted a FAST test, which helps to detect a stroke. This came back negative; but, convinced he wasn't well, she continued to investigate and picked up her first aid manual to check other symptoms.

Sure enough, it indicated he may have had a series of mini strokes. She advised her dad to be checked by a doctor as soon as possible and the following day he was referred to the hospital to have a scan, which found he had indeed had a Transient Ischaemic Attack (or mini stroke).

'I just had a gut feeling something wasn't right and I'm so glad we caught it early.'

'I really do believe my first aid training as a student volunteer with St John Ambulance gave me the skills and confidence to do the right thing. Without the knowledge, I really doubt I'd have taken any action, as the symptoms were fairly minimal and seemed to ease,' said Munazah.

Munazah's dad is now on long-term medication as a mini stroke can often be a warning that the patient is at risk of a full stroke in the near future.

Learn about becoming a student volunteer. 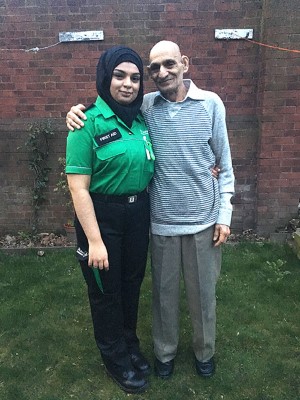 Munazah Abid with her dad