The 2019 Everyday Heroes Awards honoured individuals, volunteers and teams who step forward in their communities and in the moments that matter to help loved ones, colleagues, customers or even strangers in need.

Three winners of each category, Community Hero, Workplace Hero, and Guy Evans Young Hero, were announced on the night. Alongside this, special awards were also given to the winners of the Volunteer of the Year and Lifetime Contribution to St John Ambulance.

The ceremony was hosted by celebrity vicar, broadcaster, and former pop star the Reverend Richard Coles. 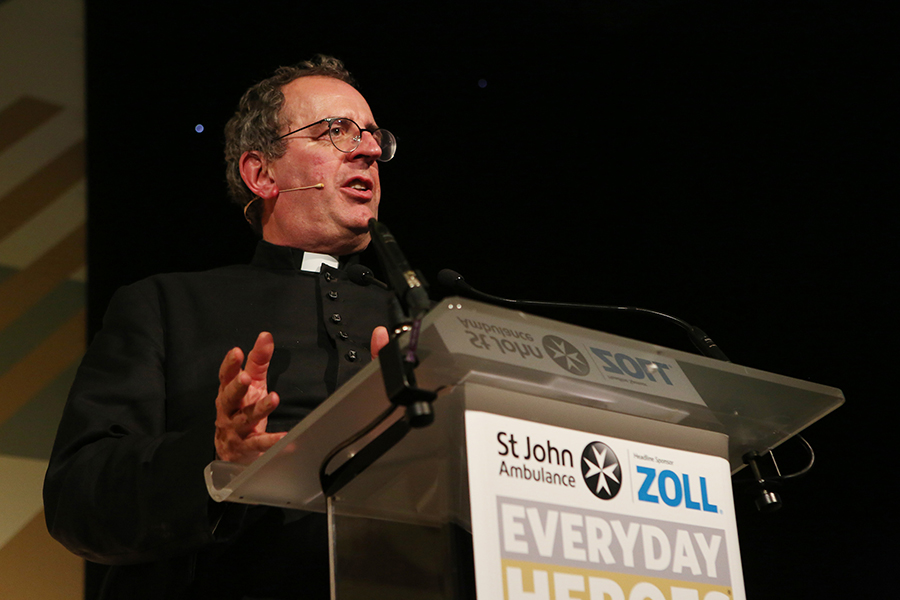 WINNER Logan Chatfield – 11-year-old Logan gave first aid to his Grandad who was having a heart attack, just one week after he learned how to do it at St John Ambulance Cadets.

WINNER Jack and Gabriel Walker – brothers who went to the aid of a neighbour who had attempted suicide. Gabriel performed chest compressions, while another neighbour gave rescue breaths and Jack relayed information to and from the emergency services.

WINNER Hastings Homeless Service – The service has been improving access to healthcare and support for homeless and vulnerably housed people in Hastings and St Leonards-on-Sea for 15 years.

HIGHLY COMMENDED Peter Hollely (Soho Angels) - The Soho Angels are a team of volunteers helping people who become vulnerable after a night out. The Angels work in partnership with St John Ambulance volunteers to provide medical help at the Night Hub. Alongside keeping people safe, they’re helping prevent trips to A&E. Peter helped to set up the scheme and has been integral to its ongoing success.

WINNER London North Eastern Railway (LNER) - LNER installed 135 life-saving defibrillators in rail stations and trains travelling between London Kings Cross and Edinburgh in the last 12 months and provided training for staff in how to use them in an emergency.

HIGHLY COMMENDED Chris Youngs - Deputy Estates Manager Chris Youngs found himself in a race to save his colleague’s life after he went into cardiac arrest while working on the track at Epsom Downs.

Volunteer of the Year – Heidi Doggett - Heidi is the unsung hero behind St John Ambulance’s events cover for Leicestershire, Northamptonshire and Rutland – a vast geographical area which includes five stadiums, all requiring first aid cover for most of the year.

WINNER Alicia Lord & Lydia Hancock – First aiders Lydia and Alicia were on duty at the 2019 Brighton Marathon when they talked down a young suicidal male from a cliff edge.

HIGHLY COMMENDED Natalia Perdek and Tarhan Ibrahim – the LINKS volunteers performed CPR for an hour on a member of the public who was in cardiac arrest.  The patient was eventually taken to hospital after regaining a pulse, and the young pair were praised by police for their life saving actions.