May 27, 2022: St John volunteer and face of the charity’s Ask Me campaign, has been awarded a special commendation at a West Mercia Police awards ceremony for who saving the life of a man involved in a serious road traffic collision. 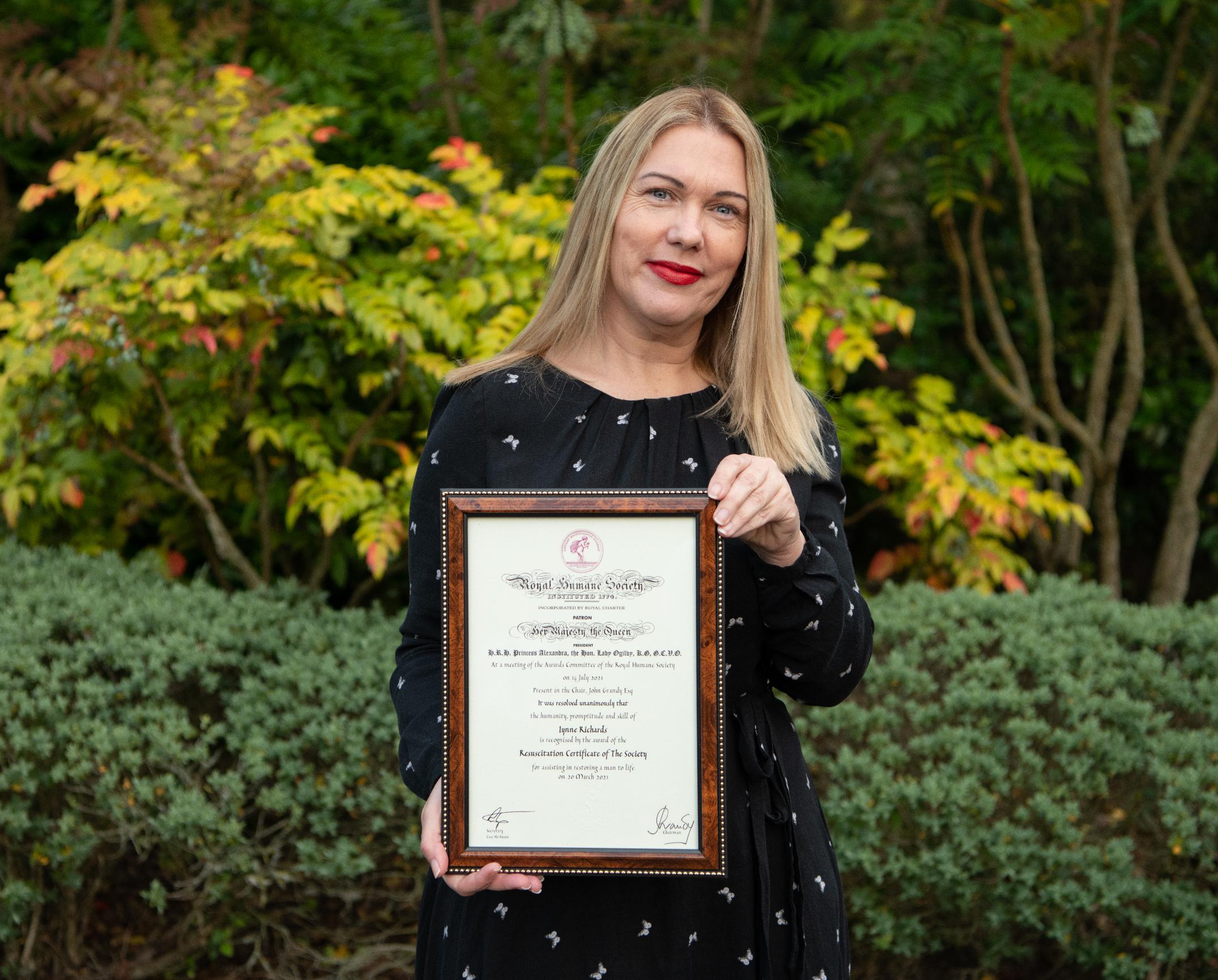 On Wednesday (25 May) Police Chief Constable Pippa Mills presented Lynne Richards the ‘Resuscitation Certificate of The Society’ award for her bravery.

The prestigious Royal Humane Society award is given to those who respond quickly during an emergency and use their first aid skills to help save a life.

Back in March 2021, Lynne was in a taxi on her way into Telford’s town centre when she witnessed a van ploughing into a wall.

She quickly realised something was wrong and calmly took control of the situation and started battling to save the driver Steven Shorter’s life.

Lynne explains: “The driver’s side was wedged against the wall, so I climbed into the van on the passenger side, shouting at a woman passer-by to call 999. An air bag on the passenger's side had inflated and was glowing orange and smouldering. Someone was shouting at me that I needed to get out of the van in case the air bag burst into flames.”

“The man was breathing, and I didn’t want to move him initially in case he had neck and spinal injuries. But then I realised he was not breathing normally, and he subsequently lost consciousness so I knew I had to get him out. I told myself out loud that it was a case of life over limb.”

Lynne called on a passing cyclist to help her get Steven out of the van and lie him on the pavement.

“At that point it was obvious he’d stopped breathing so I unzipped his jacket and started chest compressions. A town centre security guard arrived, so I asked him to radio for a defibrillator.”

Lynne continued cardio-pulmonary resuscitation (CPR) while the guard used the defibrillator to deliver shocks to Steven’s heart until paramedics and police officers arrived at the scene.

After two shocks were delivered, Steven thankfully regained consciousness and was taken to hospital, where he made a full recovery.

The police officer Lucy Jones, who responded to the scene with Lynne, also received the special award on Wednesday.

Telford local policing commander, Superintendent James Dunn, commented: “The St John’s Ambulance provide an incredibly valuable service in support of us as police, and the wider emergency services, and we welcome their hard work and the hard work of all of those who volunteer to help keep our communities safer, including our own special constables.

“Lynne’s quick thinking and life-saving actions in March of last year are very deserving of a RHS award, and we are pleased to be able to recognise her in this way. Congratulations to Lynne again.”

On receiving the award Lynne said: “I feel so proud to be recognised in this way. It is a wonderful feeling knowing I was able to use all my skills to help save Steven’s life.

“But anyone can do what I did that day. I would urge everyone to learn a lifesaving skill like CPR – or basic first aid. You never know when you may need it.”

Lynne has since been reunited with Steven, which gave him a chance to thank Lynne in person for everything she did that day.

Steven said: “I owe my life to her. I don’t remember anything about what happened, and I have no memory of Lynne, but I’ll always be grateful to her and for the fact that she had those skills which meant she knew exactly what to do when it mattered most."

As a testament to Lynne’s incredible lifesaving actions, St John has made her a face of its Ask Me campaign. The campaign runs from April to June and hopes to help increase vital donations, recruit more people into its youth programmes and encourage everyone to learn first aid skills.

The charity has a huge range of first aid resources online, and courses across the country, for anyone wanting to learn how to save a life. Find out more and sign up on their website: sja.org.uk